We are open by appointment or available to meet with you by phone or video conference. Give us a call today! 262-551-8900

The Power of Standing Your Ground on Your Investments 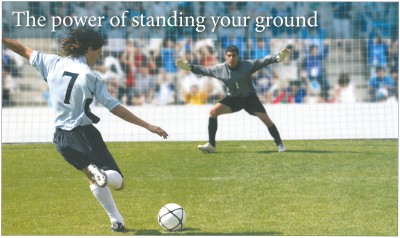 The target is 8 feet high and 24 feet wide. As the kicker hurls the ball at speeds near 125 miles per hour, the sole defender has about a quarter of a second to react – and to get it right! I’m talking about the penalty kick. With the World Cup in the spotlight this month, let’s spend a few minutes and talk about SOCCER!

Most of us actually have a lot in common with soccer goalies. During penalty kicks, goalkeepers almost always choose their action before they can clearly observe the direction of the kick (see photo). You can plainly see that the goalie has already decided to move to his right – even before the ball is kicked.

Has there ever been a time when the markets were SO volatile that you’ve decided to take action on your investments – to do something – anything – with your investments?

An *analysis of 286 penalty kicks in the top leagues and championships worldwide shows that the overwhelming choice (94% of the time) is to move – either to the left or right. When the goalkeeper guesses the correct direction, they save 25-30% of the shots.

Yet 30% of the shots are kicked at the center of the goal, where, if keepers do not move, they save 60% of the shots directed there. We could logically conclude that the optimal strategy would be for goalkeepers to remain in the goal’s center.

How often do you suppose the goalkeeper stays his ground? Goalies held their ground only 6% of the time – yes, SIX percent! Wondering why they do that? According to researchers in this analysis, the reason relates to the fact that a goal scored produces worse feelings for the goalkeeper following inaction (staying in the center) than following action (jumping left or right). In other words, if you don’t make the save, at least you tried, and you feel better for having acted. Which leads us to a bias for action. 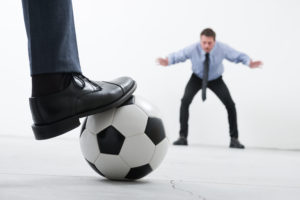 Goalkeeper behavior reveals a widespread human tendency: a predisposition to act when facing stressful or dangerous situations, including the possibility of loss.

As investors, we go into “fight or flight” mode where flight means taking our money out of the market. It’s our instinct to hold onto or protect what we have because, for early humans, holding onto one’s assets was a matter of life and death.

Our compulsion to act, coupled with a fear of loss, can really trip us up – especially during periods of challenging investment times. Perhaps we can help…

When you feel compelled to move, why don’t you call us? Let us help you analyze your situation so that you can make an informed decision based on needs – not feelings. Sometimes it’s more powerful to just stand your ground.